The tidyverse philosophy introduced by Hadley Wickham has been a game changer for the R community. It is based on intuitive rules of what a tidy data set should look like: each variable is a column, each observation is a row (Wickham 2014). At its core, the tidyverse collection of R packages is powered by a consistent grammar of data manipulation and visualisation.

The tidyverse grammar makes it easier to manipulate data sets using simple expressions that reduce the syntactic overhead and allow you to focus on the data. Thus, packages like dplyr or tidyr are great for exploratory data analysis (EDA) and hands-on data wrangling. A small downside of this approach is that these tools require a bit more effort when using them in functions with variable parameters. In general you want to use functions to improve the reusability and reproducibility of your code.

This is where the tidy evaluation comes in. A few additional methods and concepts are sufficient to make all your tidy code run smoothly in a function context. Here I will go through some relatively simple examples to get you started.

Before we begin we will need the following libraries:

We will use the Orange data set, which is part of the datasets package and records the growth of 5 orange trees. Here are the first 5 rows:

Personally, I’m learning most efficiently by first looking at examples that show the code in action and then tweaking them to fit my needs. After playing with the code for a bit and inevitably breaking something I turn to the docs to understand more about the syntax and additional arguments of the function. Thus, all my posts on tools or methodology will follow the same pattern: I will jump right into the action by looking at a useful yet simple example or two. Next, I dissect this example, maybe break something, and explain the arguments. In closing, there will be a few more complex examples, caveats, pointers, and/or resources. Sounds good? Here we go:

The first example is a function that takes as input a data frame df and a variable var from that data frame (i.e. a column/feature). The output is the difference between the (global) median and the mean of the variable. This is a realistic example of a concise helper function, since it goes beyond basic in-built tools and provides a quick check on whether a distribution is symmetric1:

Now we apply it to the circumference of trees to find that the mean is larger than the median:

To understand how it works here are the 2 key concepts:

In most situations enquo and !! are all you need. Conceptually, there’s a bit more to it since enquo encodes the current state of the environment along with the variable. This is a useful property, which makes enquo aware of parameters defined outside a function, but for now you can ignore these finer details.

(Talking about details: foo or bar are popular names for dummy variables in many programming languages. It’s just something that needs a name for the moment but can immediately be forgotten once its time-limited purpose is fulfilled.)

You can quote and unquote in the same step. Let’s go a bit further and include grouping by another variable, here the age of the trees:

Turns out that for some ages the mean circumference is smaller than the median.

Good news: quote/unquote also works for ggplot2. Here we quote the x, y, and colour-group variables of our plot: 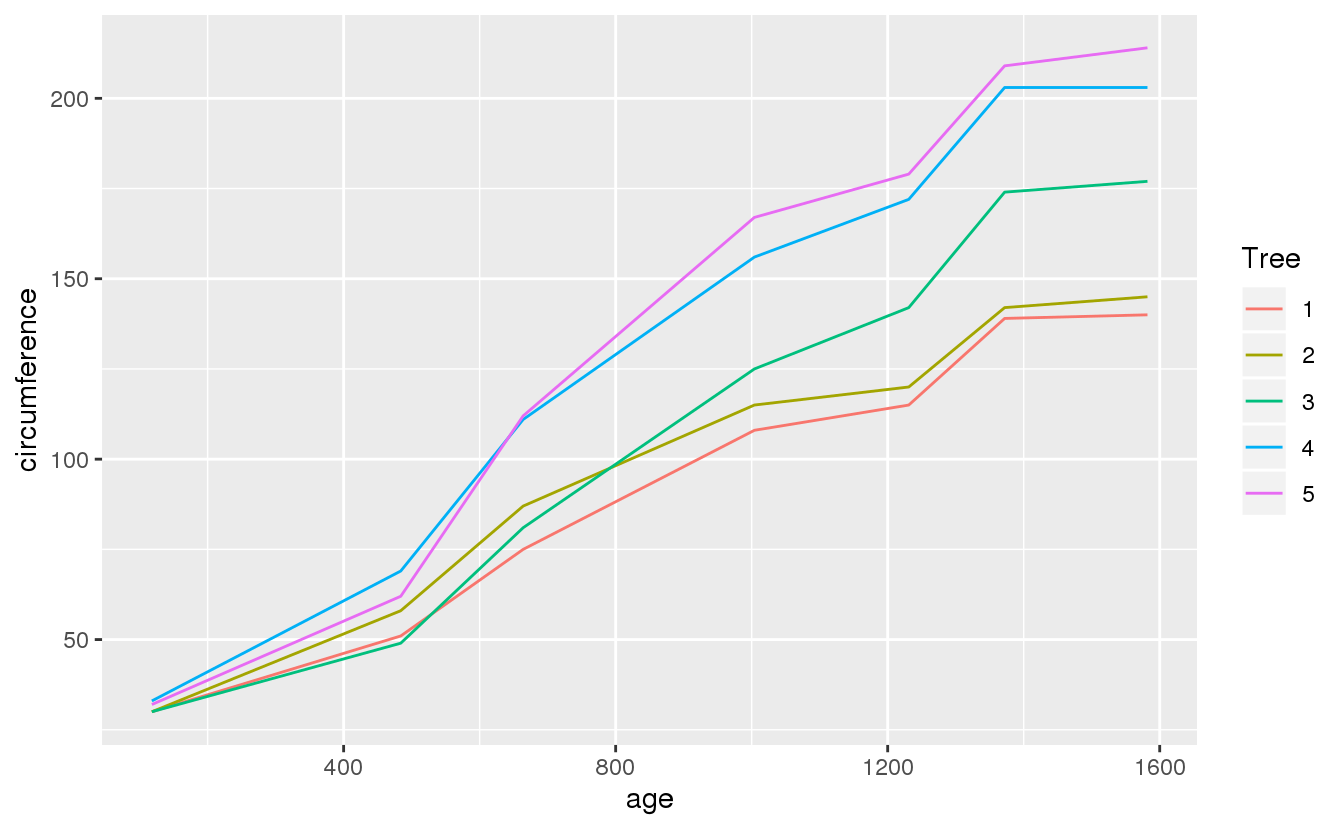 Some trees grow faster than others.

In fact, ggplot2 is a great use case because it allows us to quickly built helper functions if we need to repeat a certain plot for many similar features. Individual modification to those templates can be added using the ggplot2 grammar. Here is a histogram example where we add a custom title to the second plot2: 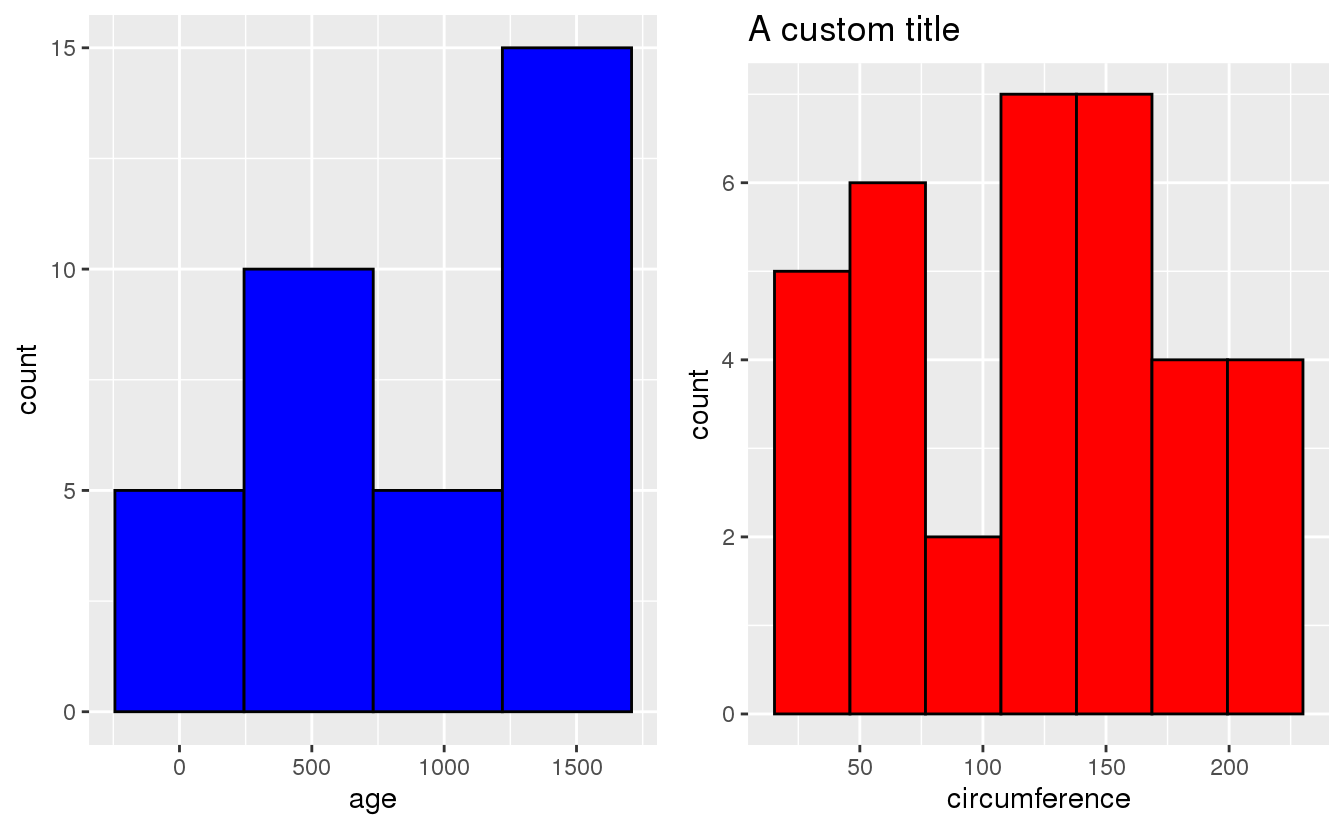 You see that here the number of histogram bins and the plot colour are being passed to the function as normal integer and string - without need of being quoted. This works because these parameters are not R expressions.

There will be a second post soon about more complex tidy evaluation examples. If you’re interested, watch this space.

In the meantime: Curious about the bigger picture?